Hindu Swayamsevak Sangh Japan has been celebrating Birth Anniversary of Netaji since last 4 years and this is the fifth consecutive year.To add, it was Ritabrata banerjee who had demanded that the Indian government declare 23rd January as देश प्रेम दिवस….Also called as Patriotism Day as a fitting tribute to a great Indian nationalist famously called as  Netaji.

Netaji association with Japan started when he travelled to the Nazi Germany and Imperial Japan to seek an alliance to fight against the British Forces for India’s Independence. With the support of the Imperial Japanese in 1943, He was successful in revamping the‘Indian National Army’ popularly known as ‘आजाद हिन्द फ़ौज ’ which was originally established in 1942 by Rash Behari Bose.

We can proudly say that Rash Behari Bose laid the foundation and did the spadework for the Indian National Army and later Subhash Chandra Bose took it to the next level under his leadership. Our Souls will always be indebted to these unsung heroes of our Indian Independence struggle.

Jan 21st,  is also the 74th  Death Anniversary of Rash Behari Bose. HSS Japan took this opportunity to celebrate and paid tribute to our two Heroes who had created an impact in the hearts and minds of ourselves and our children in the far away land. On this occasion, we were very happy to announced the presence of Mr. Oyama San, Shri Balasaheb Deshmukh and Negishi San with us.

Shri Balasaheb Deshmukh ji is 80 years old and have been living in Japan since more than 40 years. He is a big follower of Netaji and is working with his Japanese friends to set up a proposed peace memorial and also statue of Netaji  in Nikko.

Negishi san’s full name is Motoyuki Negishi. His father worked with Netaji as a liason officer because of his bilingual skills and thus shared valuable moments with Netaji. Negishi san is also a senior most member of team Netaji  Japan.

Mr. Hiroshi Oyama san, has served as a  secretary to minister of MITI, as the chief director of medical and school corporations, and is active as the chief director of Environment Policy. He also teaches junior politicians as the head of Murakami politics school. He often, visits India, and deliver  lectures on “Netaji, his character and feats observed by Japanese” at many places including universities throughout japan.His father has participated in Imphal operation and fought against the western powers together with INA commanded by Netaji and died in Myanmar(former Burma) at the age of 25. 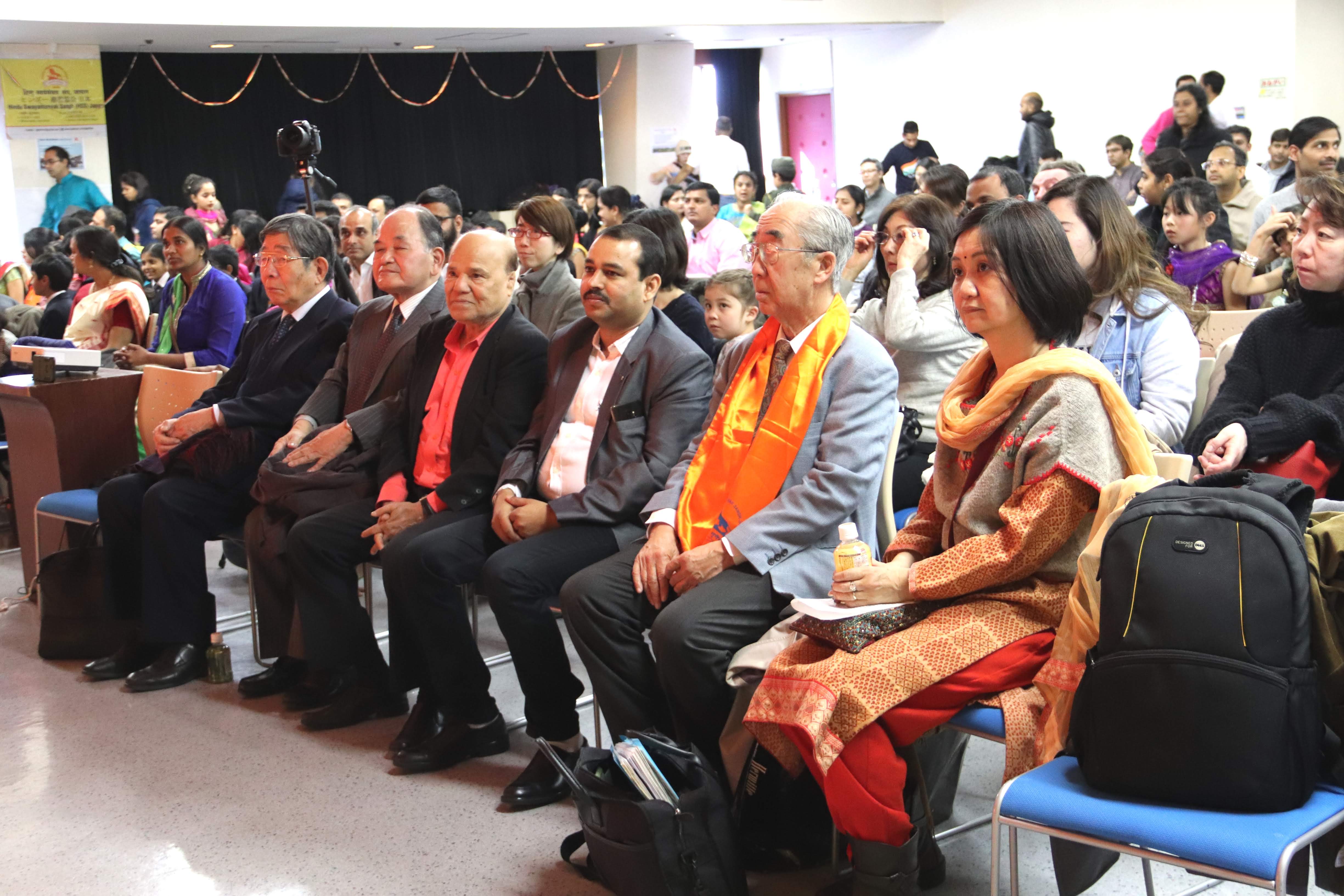 The event began with  honoring Sharda Devi- Ma Saraswati, The god of Knowledge and wisdom with soothing bhajan and resonant shlokas by the team lead by Mrs. Saranya- The chanters are- ( list of children) :

Bande Mataram is a Bengali poem written by famous writer Sri Bankim Chandra Chatterjee in 1870.It was later included in his 1881 novel Anandamath. The poem was composed into song by Tagore. The first two verses of the song is considered as a national song of India.

Dhana Dhanya-Dhana Dhanya is a very famous nationalist Bengali song written by Sri. Dwijendralal Ray (also known as D.L Ray).Reportedly, this song was considered a possible choice of national anthem of Bangladesh in 1971.

Muktir-o Mandir-o-The lyrics were written by Sri Mohini Chowdhury and it became a very popular nationalistic Benglai song during the time of freedom movement.

Thank you to the entire BATJ  members for your performance.

Coming back to Patriotism  as mentioned before, it  also means love, respect and loyalty towards one’s country. Inculcating values of patriotism in children will help them to become responsible citizens. Next performance was by Vinayakas & Mayukas  – Thank you  Mayuri ji and the cute young performers for making our still feet dance to the Indian music. Well done kids. You deserve a round of applause.

Our next presentation was a short skit by Tokyo Balgokulam, led by Ms. Anupama.

Talk-The Bhagavad Gita, often referred to as the Gita, is a 700-verse Sanskrit scripture that is part of the Hindu epic Mahabharata. The Gita is set in a narrative framework of a dialogue between Pandava prince Arjuna and his guide and charioteer Krishna.The Geeta is a wonderful message of hope, consolation, peace, and above all, the divinity of man. It solves all the problems of life, gives fearlessness to everyone.

Thank you for Geeta chanting and wonderfully depicting how Bagwad Geeta have influenced some of the famous personalities.

Next performance was from Odisha community members group of Japan :

Talk-Balle Ballee…. We all know  about the Azad Hind Fauj, There is no second thought that most of the Sikhs came forward to join in . The honorific Netaji Subhas Chandra Bose was the best Bengali friend and admirer of the Sikhs. Netaji even had a close Sikh friend Niranjan Singh Talib by his side throughout the course of his historic escape from house arrest on 19th January,1941.

Lets give a tribute to his friend in the form of Punjabi Bhagra  performed by the students of  IISJ, India International School in Japan, yokohama which  is the first and oldest school to cater to the Indian Diaspora in Japan. It was establised in 2004 to specifically fulfill the needs and expectations of Indian families who made Japan their home away from home .So here we go with bhagra…..

It’s a soothing language to hear, lets have it orated by the Yokohama and Atsugi singers…with Sanskrit Geet in which they are asking us to take a pledge to spread the new message of building an organization and spreading a new message.

Talk-Kohana International School in Kawasaki has been setup with the objective to provide international educational facilities and curriculum that is deep rooted in tradition, culture and heritage on one hand and headed towards the modern technological and scientific knowledge on the other hand. The student at kohana are encouraged for freedom of expression and action.

Special Thanks to all Karyakartas and Ambuj Jee , Sanju Jee and Mukesh jee for video and photo collections – Much appreciated !

@ALL and specially those who participated in event, there are photos from Netaji Subhash Chandra Bose Birth Anniversary Celebration event :